Replace your inefficient factory intercooler with a VRSF upgraded intercooler kit to get the most out of your N55. Our intercoolers are designed to be the best performing, direct bolt on intercoolers available for your BMW with special attention to quality and performance while maintaining a reasonable price. Each VRSF intercooler includes our proprietary High Density fin pack which results in higher HP gains compared to the other guys, mainly due to our incredibly dense internal and external fin pack. Our core was engineered to offer a greater overall surface area for increased heat absorption as well as dissipation.

The most important component of any intercooler is the core. The core cools the charged air from the turbo before it enters the engine and the OEM BMW tube and fin intercooler is designed to support low boost levels and air flow. When tuned, airflow and boost levels are increased significantly. This causes the OEM intercooler to heat soak and reduces HP and increases the chance of pre-detonation.

We remedy this problem with our proprietary, high density bar and plate intercooler core which utilizes a staggered and offset internal and external fin pack. The VRSF HD core has been carefully balanced to provide the the best intake temperature reduction while maintaining minimal pressure drop. The VRSF HD core is also much more durable than the OEM tube and fin core, with a better ability to withstand rocks and other debris.

The VRSF Performance HD Intercooler is comprised of an incredibly dense fin pack both internally and externally. It’s not uncommon to see intake temperatures drop at the end of a 3rd gear pull due to the Performance HD’s larger overall surface area. You can expect to see an intake temperature reduction on a stock turbo, full bolt on car during a 3rd gear pull which is why we the Performance HD is THE best option for your N55. Please note that the HD fin pack is now standard at no extra charge!

We include everything required to replace the OEM intercooler on your X3 35iX, X4 35iX & X4 M40iX. All VRSF intercoolers feature tabs that allow the retention of the factory fan shroud and our CFD optimized cast end tanks are designed to work with both the OEM intercooler piping as well as any aftermarket charge pipe that adapts to the OEM FMIC. After each intercooler is pressure tested, we then apply a thermal dispersant coating which ensure a leak free experience along with superior protection against the elements. Our intercoolers fit both Left Hand Drive (LHD) & Right Hand Drive (RHD) Models as well as all XI models.

87% larger than the OEM intercooler.

Compatible with both OEM and aftermarket charge pipes.

This item fits the following BMWs: 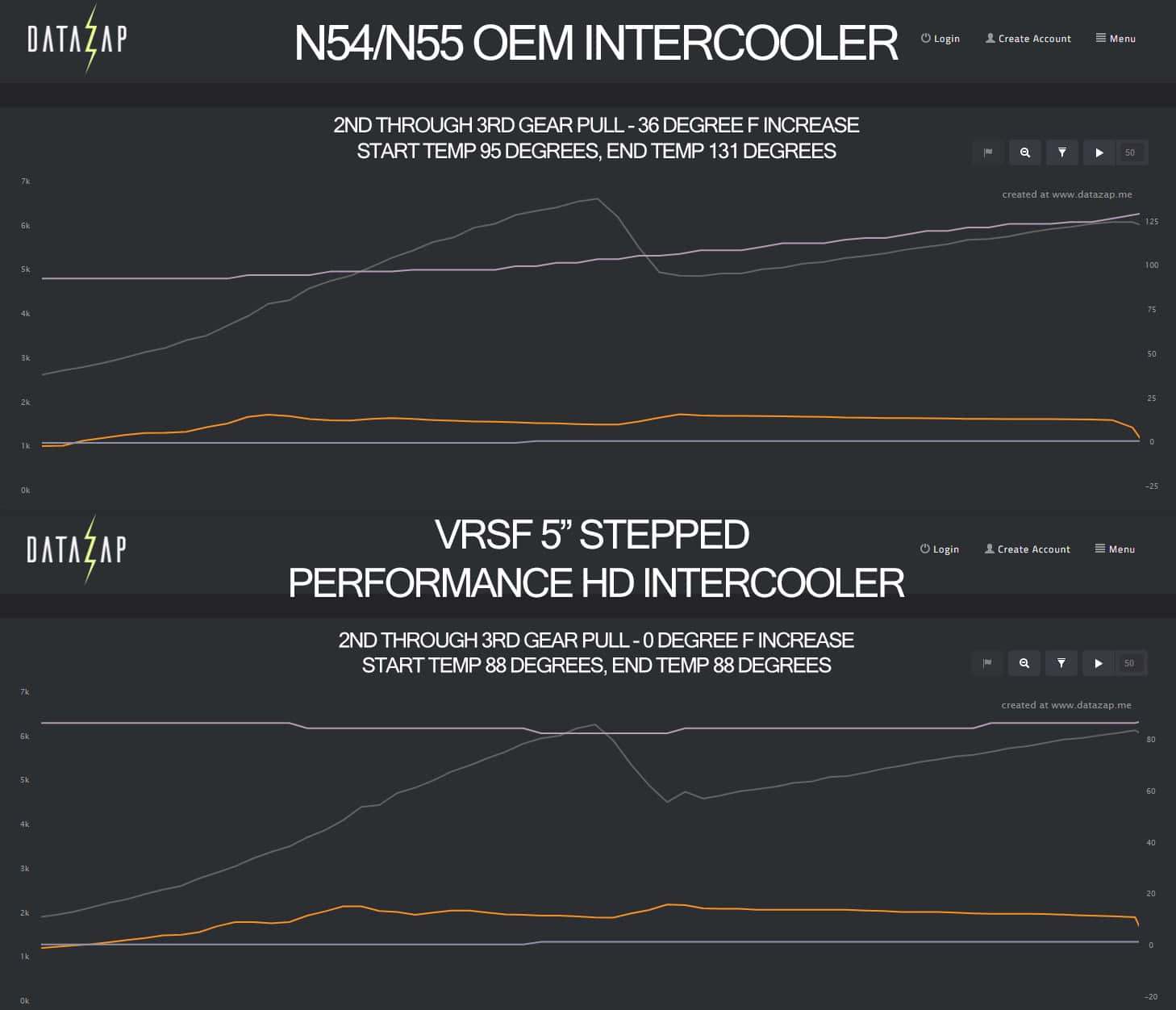 We would love to work with you on your car or project. Please feel free to call or message us with any questions or to get an estimate!